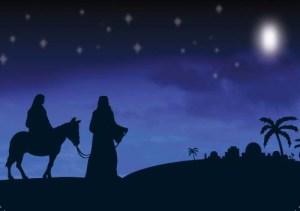 At that time the Roman emperor, Augustus, decreed that a census should be taken throughout the Roman Empire. (This was the first census taken when Quirinius was governor of Syria.) All returned to their own ancestral towns to register for this census. And because Joseph was a descendant of King David, he had to go to Bethlehem in Judea, David’s ancient home. He traveled there from the village of Nazareth in Galilee. He took with him Mary, his fiancée, who was now obviously pregnant.

Mary and Joseph set out for Bethlehem on the back of a donkey, because the powers that be had declared that everyone had to return to their home towns so that a census could be taken.

I can’t imagine what the journey must have been like. It certainly was nothing like the journey would be if you took it today. There were no highways, no buses, no roadside stops where you could buy food and drink. There were no hotels or showers or restaurants. Mary was obviously pregnant, which means she was also uncomfortable. All my friends who are Moms talk about that stage in their pregnancies as one where they were just ready to be done with it.

It must have been cold, and times frightening. I wonder where they stayed at night, what food they ate on the journey. It all looks so pretty on the Christmas cards we send, but the reality would have been quite different.

Isn’t that true of all of our Christmases, though? Often everything looks quite pretty – the family is dressed up, they gather at church together smiling at other families and friends. No one quite sees the cracks beneath the surface: the argument the siblings had on their way to the church service or the worry that the parents share over the bills that will come due in January. There is always more to the journey than meets the eye.

In Newtown, Connecticut, the first of the funerals for the children victimized in Friday’s shooting were held today. That town is on a journey of its own. Just holding the funerals is going to take quite a while, never mind all the time it will take for answers to be discovered or for healing to begin.

I am so thankful for a God who understands the journeys we face. I believe God was with Mary and Joseph on the road that they traveled to Bethlehem. I believe that God is with us on the roads we travel towards the celebration of Christmas. I believe God is present with the people of Newtown, as they journey from Friday’s tragedy to whatever the future will hold for them.

Whatever your journey looks like, may you know that God is with you on the road. May you know that Jesus took a long journey before he was even born, and continued to journey throughout his life. May these thoughts comfort you, and in finding comfort, may you pray for the comfort of others on the roads that they travel.

One thought on “A long journey…”